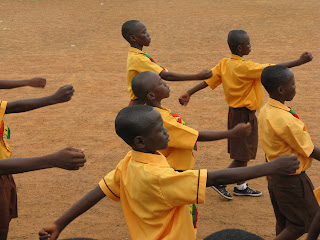 "Omanpanin", as explained to me, means "Leader of the Nation" or "President". "Omanpanin" is written on the back of the shirts of the students at Abraham Lincoln Memorial International School, the place I am staying at for the month of March.

Madame Doris Osei, the school's founder and director, explained to me that the students are the future leaders of the nation.

On March 6th every year, Ghana celebrates its Independence Day from British colonial rule. On this day, there are parades, celebrations, and marching competitions between schools. The competitions are similar to marching band competitions in the States.

I went to the Abuakwa grounds near Kumasi, Ghana to witness maybe 30 or more schools perform in the marching competitions. Probably due to a lack of resouces, there was one marching band placed in the middle of the grounds to perform all the music for the various marching groups. This band was composed of trumpets, trombones, drums, and other instruments played for 2 hours.

The school groups marched in a large circle and the bystanders and supporters watched from the outside of this circle. It was a festive and fun atmosphere with people selling food (plantains, eggs), drinks, and frozen treats. When the students got ready to march, they became very serious, hoping to win the competition.

When it came time for Abraham Lincoln International School to march, all of their teachers were very excited. The students went around the circle and then they came to the tent where the dignitaries and judges sat. School children from the other side rushed past the security and police to get a better view. 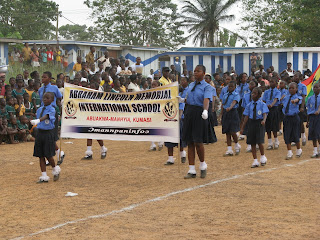 The leading student with the baton stopped in front of the judges and the crowd started cheering and shouting as he put on a twirling show like no one else had done before. I was filming the rest of the students and missed most of it! When he finished, the security started chasing the students back to their places and everyone was excited and having fun.

It turned out that Abraham Lincoln got second place in the competition for the 3rd year in a row. A government school always gets first place. After all the students marched, the teachers from Lincoln and other schools marched and started dancing in front of the judges. Later, the students came back to the school and had more treats. It was a fun time and the students from Lincoln were definately proud of their school's achievement.

Ghana is the first sub-Saharan country to gain independence from a former colonial power. Kwame Nkrumah is considered the liberator of Ghana and was also the country's first prime minister.

GHANA'S FLAG: The flag of Ghana has a red horizontal stripe at the top and from what I've heard, the red represents the blood shed for freedom. The horizontal yellow stripe in the middle represents the country's richness in minerals. Ghana is the second largest exporter of gold. The horizontal green stripe at the bottom represents Ghana's richness in forests and vegetation. Ghana is the 2nd largest exporter of cocoa. The black star in the middle represents the People of Ghana and African people gaining their freedoms. These colors were inspired by the Ethiopian Flag's colors, a country that was not dominated by colonial rule.

Here is a poem that I'll be thinking about while I'm here in Ghana.

The Weaver Bird
by Kofi Awoonor

The weaver bird built in our house
And laid its eggs on our only tree
We did not want to send it away
We watched the building of the nest
And supervised the egg-laying.
And the weaver returned in the guise of the owner
Preaching salvation to us that owned the house
They say it came from the west
Where the storms at sea had felled the gulls
And the fishers dried their nets by lantern light
Its sermon is the divination of ourselves
And our new horizons limit at its nest
Bu we cannot join the prayers and answers of the communicants.
We look for new homes every day,
For new altars we strive to rebuild
The old shrines defiled by the weaver's excrement.

Taken from The Penguin Book of Modern African Poetry, 4th Edition, 1998, edited by Gerald Moore and Ulli Beier--Kofi Awoonor: b. 1935 at Wheta, Ghana. Studied at Achimota, Univeristy of Ghana, London, and New York. Edited the literary review Okyeame in the early sixties. After the fall of Kwame Nkrumah, spent some ten years in Britain and the USA before returning to Ghana in 1976 and joining Unversity of Cape Coast. Awonoor was imprisoned for a year in Usher's Fort just before Jerry Rawlings came to power. Since then he has served as ambassador in Brazil and Cuba. His collected poems, Until the Morning After, were published by Greenfield Review Press in 1987.
Posted by Jude Rockfish at 11:04 AM 2 comments:

Sssssssssssssss! is the sound used in Ghana to get someone's attention amidst all the street noises. It's very effective. This sharp hissing sound stands out very well and it takes little effort to make or to make loud. An "excuse me" probably wouldn't work with the other bustling noises around.

In the U.S., whistling is often used or maybe snapping the fingers or a sharp shout of "Hey!" Maybe you know how you might get someone's attention in another culture and can share it with us in the comments section.

After you get someone's attention, a good thing to learn right away in Twi (tchwee)is: " Mepaakyew, me pe nsuo." This means in English, "Please, I'd like some water." Twi uses many symbols I won't be able to print, so these are rough examples.

Or if you're hungry, You might say "Me pe jollof" (May pay JOE-lof). Jollof is a very delicious dish of fried rice wrapped around some meat such as chicken along with some salad mixed in. Yum or "Eh DAY PAH PAH!"

Cold water is everywhere in the cities of Ghana. The hygienic water is packed in square plastic sachets (bags) of 500ml and are often sold by women and children who carry the sathets of water in baskets on their heads. With your teeth, you rip open a little opening in the corner to suck out the water. The sachets cost 5 pesewas or about 4 U.S. cents.
Posted by Jude Rockfish at 10:23 AM No comments:

Akwaaba! (pronounced: Ahck-wah-bah, or Ah-kwah-bah) This is what I've been hearing all the time since I arrived in Ghana on February 19th, 2009. It means Welcome! in the predominant language of Twi, and I've been feeling very welcome here.

Ghana is in West Africa and, according to the Bradt Guide, is about the size of Great Britain or the State of Oregon in the U.S. The estimated population of Ghana in 2006 was 22.5 million people.

English is the official language but according to the Bradt Guide there are 46 African languages spoken. The major languages spoken are Twi, Fante, Ewe, Ga, Dagomba, and Halisa.

The temperature right now is varying between 25 degrees Celsius to 38 degrees Celsius. Those of you in the States will have to figure out what that is in Fahrenheit. Here's a hint: I wear shorts and sandals all the time and I sweat a lot. I also, when I can, use a fan at night.

When I researched coming to Ghana, I read that the people of Ghana are known as the friendliest people in the world! I knew I had to meet these people.

Just two days after I arrived, I was invited into a family's home and made to feel a part of their family immediately. Last Saturday, March 7th, I attended the daughter Mabel's wedding in the city of Kumasi. The family wanted me to sit with them and also get into the official family photo! I felt very honored.

Often times, when I enter a store or a home, people will say in English, "You're welcome" or they say in Twi, "Akwaaba". Twi, pronounced almost like "tchwee", is the predominant language, an Asanti language, from the area I'm living in now, the Kumasi region. Ga is primarily spoken around the capital city of Accra (pronunced Ahh Krah).

The family I lived with also spoke Ewe (pronounced: Ay Way) They are from the area east of Accra, near the country of Togo. There are many other languages I'll learn about as I live here and let you know about them.

I'll be in Ghana until November 21, 2009. Soon, I hope to include photos, possibly video, and sounds from my experiences in Ghana. I will be sharing what I see and do, and hopefully you get to know Ghana and the wonderful people I meet through this blog. I hope to write something once or week, so stay in touch and learn about another part of the world!